Coal-fired power stations are retiring across Australia. What does this mean for Tasmania?

Australia’s original transmission infrastructure, built decades ago, was brilliantly simple. Major (mostly coal-fired) generators were connected to major load centers (such as large industrial manufacturers), and everyone else just plugged in along the way. The generator knew what it was generating, and the load center knew what it was consuming. If there was an interruption at either end, the generator and load center would work out what adjustments each should make. There was not a lot of redundancy, so if an incident impacted the line, everyone would have to go without for as long as it took to fix it.

News broke recently the retirement date for the Yallourn coal-fired power station will be brought forward to 2028, four years earlier than previously scheduled. In December, a major incident at Liddell coal-fired power station injured a worker and led to a partial outage predicted to last for months. Liddell is currently scheduled by its owners to retire in early 2023. Both Yallourn and Liddell are massive generators, each still contributing a significant proportion of Australia’s electricity needs.

Australia has 16 coal-fired power stations remaining on the National Electricity Market (NEM) (the NEM does not reach to Western Australia, where there is another three). 10 are owned by a handful of privately owned companies. The other six, all located in Queensland, are owned by Queensland government entities.

Over the next 20 years, two thirds of Australia’s coal-fired generation capacity is scheduled to retire and there are no plans on the books anywhere for any new coal-fired power stations to be built. Some of these power stations individually generate as much electricity as all of Tasmania – or more. And half of them are already over 40 years old.

To the surprise of some observers, the uncertainty of 2020 did nothing to curb Australia’s appetite for new commercial and residential renewable energy projects – it was a massive year for construction, completion, and approvals. Australia leads the world in rooftop solar capacity per capita. Some towns have solar on over half of their rooftops. Australia’s transition to renewables is world leading, with growth in renewable penetration exceeding predictions year after year.

Here in Tasmania, with the recent additions of Granville Harbour Wind Farm and Cattle Hill Wind Farm, our state now has the capability to generate as much electricity annually as it uses on average. There will still be years when the rain doesn’t fall when or where it is required for hydroelectricity generation or falls a lot less than average, and we will rely on BassLink to make up the annual short fall.

From 2028, it is expected there will be a cascading series of coal-fired power station retirements and increasingly it appears likely the start date of this massive change will be pushed sooner and sooner. The operation of the nation’s transmission network is changing from carrying large generation to large load centers, to transmitting and firming smaller, variable generation from all over the country.

Concurrently, industries powered by fossil fuels such as transport and manufacturing will become increasingly electrified. To keep everything going in this increasingly complex “internet of electricity”, the underlying dispatchable electricity, once supplied by massive coal-fired power stations, will need to be replaced.

There are not many ways to achieve this – but one way is Tasmania’s plan to quadruple its current electricity export capacity with the addition of Marinus Link. AEMO’s Integrated System Plan, the roadmap for Australia’s renewable transition over the next 20 years, shows our reliable, dispatchable, secure and clean energy will replace one or more of those old coal fired power stations, right when the country is really going to need it. 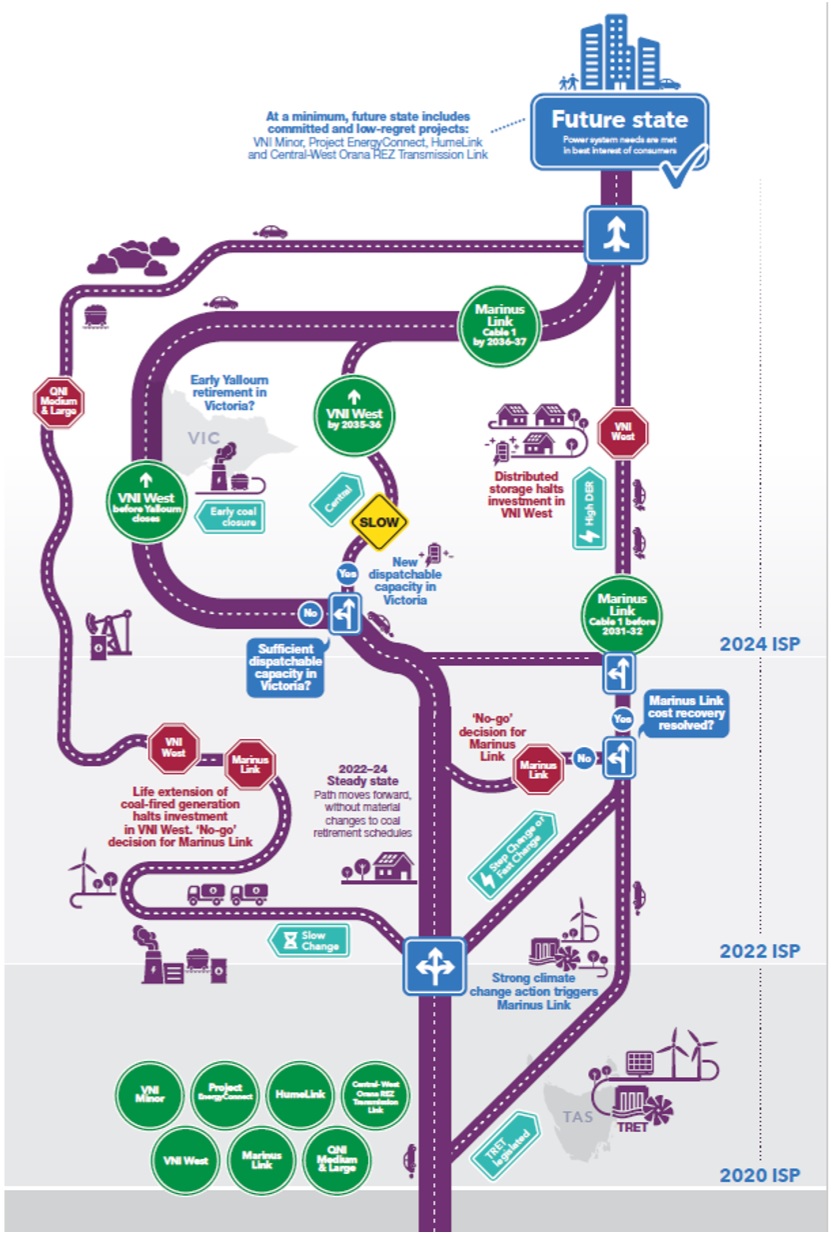