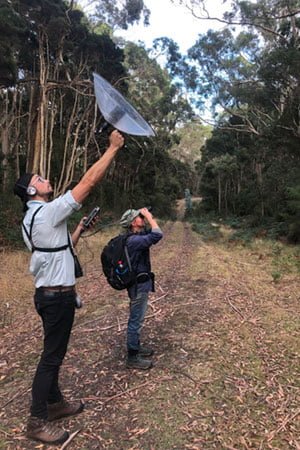 A joint project between Cradle Coast NRM and BirdLife Australia, with the aim to learn more about two King Island threatened birds, has had an early win with a reassuring discovery.

Cradle Coast NRM contracted ornithologists from Australian National University (ANU) to coordinate a survey to find out how many King Island Scrubtits and King Island Brown Thornbills are on King Island and where they are located.

The King Island Scrubtit (Acanthornis magnus greenianus) is endemic to King Island. It is confined to relict patches of Swamp Paperbark forest and is highly vulnerable to loss and degradation of its habitat. It was listed as Critically Endangered under the Environment Protection and Biodiversity Conservation Act 1999 in 2002.

Matt Webb, from ANU, on Friday spotted several King Island Scrubtits in two of three known locations: Nook Swamp, in the Lavinia Ramsar Reserve at the northern end of King Island and Colliers Swamp on the southern end of the island.

“It is really encouraging to see birds hanging in there,” Matt Webb said. “It is very positive to see birds in Colliers Swamp and it would have been disturbing if we didn’t.”

The 2007 bushfires on King Island meant the already endangered bird population was left even further threatened with 90 per cent of their habitat destroyed.

“Things were very much on the edge as it was,” Matt Webb said. “The fire could have spelled the end. The handful of tiny patches that didn’t burn are a bit of a litmus test.”

The total population is estimated at fewer than 50 birds, and without action it is estimated the subspecies has an 83% chance of extinction in the next 20 years.

“The survey has only started, and this news is reassuring because the numbers of birds has been steadily declining over the last 20 years,” Cradle Coast NRM Coastal Coordinator Anna Wind said.

“We thought we may have entirely lost this endemic species which is reliant on remnant forest for their survival. The dedicated team from the ANU will continue their efforts for another two weeks and we will have to wait until the survey is completed before we know what the final population numbers are.”

The current status of the King Island Brown Thornbill is unknown. The subspecies is difficult to identify with the last definite sighting of one bird two years ago. Without action it is estimated the subspecies has a 94% chance of extinction in the next 20 years.