The Cradle Coast – a history of world-leading renewable energy innovation

Tasmania, particularly in the Cradle Coast, has a long history of renewable energy innovation. Tasmania’s first hydroelectric power system was built at Mount Bischoff Tin Mine in 1883, and was one of the first in the world.

World-leading innovation in renewable energy in the Cradle Coast continued through the 20th century.

The Devils Gate Dam, built in 1969, was state-of-the-art for its time. It is recognised as one of the thinnest concrete arch dams in the world at just 5.1m at the base, reducing to 2.1m at the crest. The dam wall was designed using a large computer program developed inhouse by Tasmania’s Hydro Electric Company, saving many engineer-years of manual computations.

The 110m high Cethana Dam, built in 1971, is recognised as a National Engineering Landmark as the first concrete face rockfill dam over 100m high in the world to exhibit minimal leakage, proving a design used for future dams of that type around the world.

Toady, the Cradle Coast continues to be the home of world-leading renewable energy innovation.

The UniWave 200 at King Island is a 200 kW wave energy device, aimed at demonstrating the commercial viability of generating technology which could revolutionise power generating capacity for smaller communities around the world. The device is partially submerged as it sits on the seabed. It has an opening on one side to allow the movement of the waves in and out of the chamber. Water rises and falls inside the chamber, causing the pressure of the air trapped above to change between negative and positive pressure. The pressure fluctuations force the air to pass through the turbine at the top of the chamber, generating electricity.
The Blue Economy CRC recently has acquired infrastructure to develop an offshore hydrogen microgrid for research and training. It consists of a 700kW electrolyser, a microturbine and a microgrid, to be co-located with the University of Tasmania in the North West. This will be the largest hydrogen electrolyser in Tasmania and amongst the largest in Australia, and will be the first hydrogen microgrid to be installed offshore worldwide. The project seeks to demonstrate an offshore renewable energy system to meet off-grid, offshore demand, such as aquaculture.

Although wave energy and green hydrogen are both still in relatively early stages of development, the Cradle Coast is again at the global forefront of the next wave of advances in renewable energy. 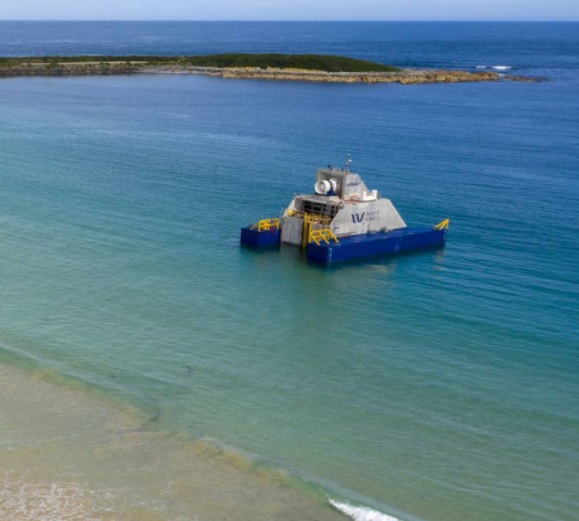